Leaving from Piazza San Vittorio along La Marmora street, we’ll go on the right avenue Tibula. After a short descent, we meet one on the left ramp to the village of Santa Reparata, where lies the beach The Colba. Turning off the Big Dipper and then left again along the constellations street, you get to the important settlement nuragico Lu Brandale. 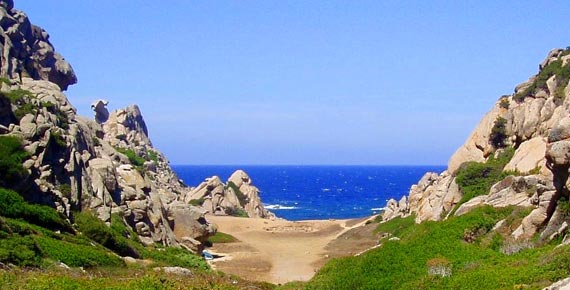 Back on the main road, there she advanced along the peninsula of Capo Testa. Crossing the narrow isthmus is passed between two beaches: the left is the Lido Rena di Ponente or Taltana; on the right, within the Bay of Santa Reparata, stretches the long beach Capicciolu. At the end of the road to reach the trail to the lighthouse of Capo Testa. The small cove on the right is the beautiful Cala Spinosa.

If you go by foot, is on the right a recess between two rocks of granite and an inscription in red paint indicating the Valley of the Moon. At one time this was known as the throat Cala Grande Valley, but in the years to the late ’70s and ’80s became one of the favorite destinations of the flower children from all over Europe, who coined the new name.

Going in the direction of Porto Quadro, and the Ficaccia Marazzino, the road makes a scenic ride around the harbor and along the coast. Harbor Framework is an extended suburb with a small beach. A dirt road connects the village to La Ficaccia, fraction starting point to reach Punta Falcone. A little further south is the beach of Cala Elder.