Santa Teresa di Gallura is perched on a cliff right next to the Strait of Bonifacio, a narrow strip of sea 11 miles wide that separates the north of Sardinia from Corsica. Boats depart from the country leading the Archipelago of La Maddalena.

The town is spread out in two bays: the port Longone, which is at the bottom of the harbor, and that of Rena Bianca, which includes a beach of fine white sand. One of the characteristics of the conformation of the Roman town is the plant or a plant made of a network of urban roads that intersect perpendicularly. 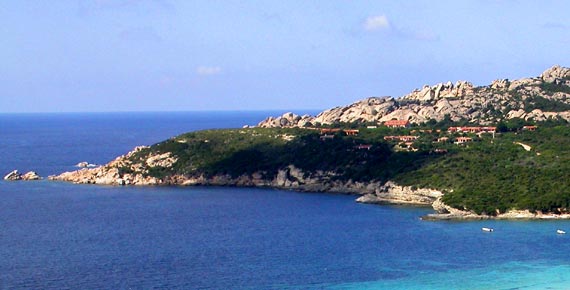 The shape is typical of the Piedmont settlements of military origin. It usually known as Longosardo. In the Roman period it was a port of considerable importance for trade. Important was the mining of granite. For the Romans, did not escape this port so strategic.

Quarries of Capo Testa provided granite for the Duomo and the Baptistery of Pisa and the Pantheon in Rome. A historic site of particular interest is the Tower of Longosardo located on the edge of rock most extreme of the country. Over the years Santa Teresa, along with La Maddalena and the Costa Smeralda has become one of the most important centers of tourism.

Among the inhabitants of Santa Teresa and the district survives the ancient name of the village, in fact, the town is familiarly called Lungoni. The actual name of the country was imposed by the king, in honor of his wife Maria Teresa. To the north of the church of St. Victor, is the beautiful beach of Rena Bianca, the small rock to the left is  Monica. The city landmark is now the Piazza Vittorio Emanuele, on which stands the institution for the promotion and tourist information.