Bosa Marina is a village of Bosa, a charming town in the Sardinian province of Nuoro. The town of Bosa on the west coast of Sardinia, just south of Alghero, is a peaceful country lying along the river Terno. Boasts very ancient origins. Coming from the state to connect both the internal Macomer, the first sight we have of the old town perched on the hill of Serravalle, dominated by the castle of the Malaspina. 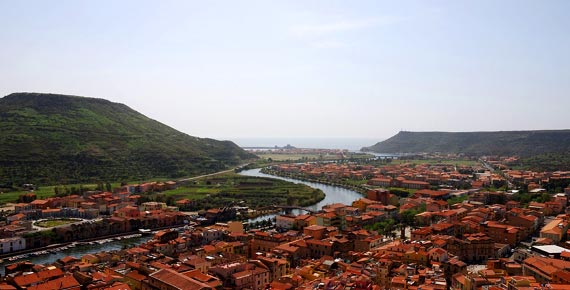 Going through a few bends we reach the valley and after a short straight road reaches the mouth of the old bridge dating from the early decades 800 AC. After the bridge you are in front of the entrance to the cathedral square in which it makes a fine show the imposing facade of the cathedral.

The medieval town has a cone-shaped structure and is very attractive because of its archaic, made of narrow streets and staircases below the altitude of the hill. During the thousand years became a fief of the Malaspina and gained fame and prosperity throughout the island for its strategic location.

The beginning of the sixteenth Bosa Marina experienced a phase of decline and was raised again later by Savoy, who favored the development of fisheries of the coral. The complete recovery occurred only in the nineteenth century, however, with the increase of crafts (leather and precious stones). Saints Emilio and Priam, celebrated on 28 May, are the patrons of Bosa Marina.

The great beach of Bosa Marina offers a particularly beautiful sight if you look at the majestic tower which dominates the landscape.