Between the towns of the coast most important and interesting to visit is necessary to remember Tortolì, one of the Ogliastra most beautiful and pleasant place. It is located near the port of Arbatax. Over the years it has become a popular bathing place and affiliates among the tourists who came to visit the region. 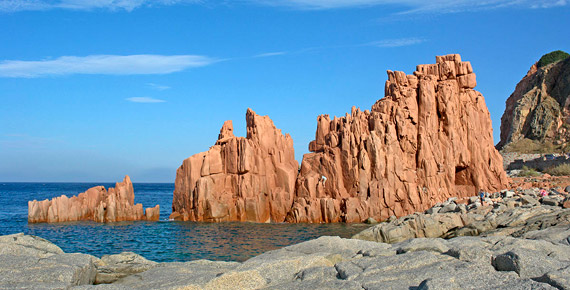 The small town of Arbatax, which also belongs to Tortolì. Cape Bellavista is located at the base of the imposing completely covered by dense maquis and surmounted by a beautiful and picturesque lighthouse tower Arbatax. Near the port you can admire the fantastic and striking red rocks, the rocks rising from the sea, very characteristics in the area.

The other side of the promontory of Cape Bellavista, lies the beautiful panoramic terrace on Cave Moresca.
In the south of Arbatax is the beach of S. Gemiliano at the base of the Cape of S. Gemiliano, where you can visit the small Spanish tower, and the unique beach of Port Frailis, white sand and the sea and beautiful-clear. Always south you can reach the beach Orrì.

Suggestive is the beach of Cea – Is Scoglius Arrubius, so named for the presence of two peaks suggestive of red porphyry which emerge from the water, and the small bay of Cea, located near Barisardo. The country of Barisardo is not on the sea but a short distance from the coast, because of the danger of the old pirate invasions.