Cagliari is a capital province of Sardinia. It has a population of 150000 inhabitants and its metropolitan area reaches 460,000. Important numbers for a city lifestyle very pleasant and liveable. Well recognized abroad its university. 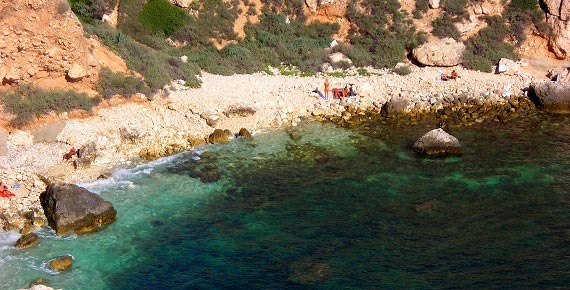 The winding streets of old town is in a vast area full of shops, to who like to do shopping. The particularity of Cagliari is that despite all the characteristics of a great urban city can keep the style and especially the seafaring Sardinian.

Near the center, sloping toward the sea in what is called the beach Poetto. It’s characterized by fine white sand and stretches around the coast opposite the city. Cagliari is the extreme south of the island in the middle. Definitely missed the visit near Cagliari are a few places.

Cape St.Elias rises from the sea with its 136 meters of limestone cliffs, which offers a wide panorama of the city and across the Gulf of the Angels. It’s the subject of many legends about the origin of the name “Sella del Diavolo”, which is commonly identified the eastern side of the headland.

The Cave of Pigeonsnear coast that opens, under the cliffs of Mount St. Elias. It’s around 60 meters long and can be reached from the sea with small boats. Cave Fighera is situated in the cove of Cape St. Elijah, which opens to 36 meters in length: these are two environments concretions, connected by a tunnel.