Dorgali is the capital of industry and tourism in Barbagia measure due to his natural environment. His village marina Cala Gonone is closely linked to the coves of the Gulf of Orosei. Tourism has contributed to the preservation of assets and old trades. 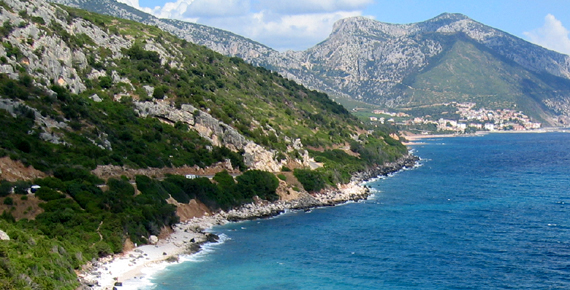 The new generations of artisans, while respecting the traditional forms, have helped establish new and original style of expression. The prehistoric archaeological sites dot the area around the village. There are two museums to visit the archaeological museum and the Civic Savior Fancello, dedicated to the young potter who died during the Second World War.

Cut in two by Via La Marmora, Dorgali retains the look of many urban centers in the province of Nuoro, retaining a core origin that over the years has expanded with more modern buildings. The shops and craft shops are concentrated in the central road and the narrow alleys adjacent. The older houses are built with stone, but many are now dilapidated and abandoned, and some, after the great portal of entry, yet still retain a courtyard.

The center of the town houses the Church of St. Catherine of nineteenth-century style, where inside you can see a wooden altar dating from the thirteenth century. Beautiful Church of Caramel, located in the homonymous hill on the outskirts of the city, a remarkable landscape. Dorgali economic resources are closely tied to its fortunate geographical position: divided between sea and mountains. If you continue towards the East Sarda vantage points are marked and visible, giving the opportunity to taste some areas of Supramonte Dorgali.

The natural beauty of this area include oaks, junipers, some endemic species, raptors, gorges, canyons and sinkholes. In the vicinity of the village is the cave of Ispinigoli that holds the highest stalagmite of Europe, reaching 38 meters in the Punic era was used to perform human sacrifices and it is indeed called the “Abyss of virgins.” Beyond the tunnel for Cala Gonone here is the Gulf of Orosei. The road that leads to Cala Gonone is very tortuous, but is short and very scenic.

On either side of the road in the woods and, after a few turns, opens the curtain on the sea. Many beaches and beaches around Cala Gonone, some are born a few years artificially. To the south, after a few miles of scenic road meets the beach of Cala Fuili. From Cala Gonone you can leave for an exciting boat ride along the cliffs of the Gulf of Orosei to discover beautiful places like Cala Luna and the Grotte del Bue Marino.